Well, what can I say? This Blogging lark didn’t really keep up the speed it started with!

Off like a Guy Fawkes Rocket – soaring and fizzing and now? – more of a whimper than a bang. With only a couple of blogs in recent weeks, I’m winning no prizes.

Though quality is what counts of course. So – talking of quality, let me start you with the Two Ronnies (Google them if you don’t know!):

A row developed today at Sussex County Council when Library listings were announced and Southern Rail’s new Timetables were listed under Fiction.

A woman complained to Police that a squad of cavalrymen from the Light Brigade had crept up to her house and seduced her. When asked if she would prefer charges she replied ” yes I would. It would be noisy but I wouldn’t be kept waiting so long….”

Boom Boom (as they say). I won’t trouble you with any more.  Sometimes even I am surprised by the funny books Brenda has amassed. I am back in Sydney now – and no pun intended.

After a lively few weeks with Peter & Christine, their four young girls and mother Joan up In Queensland,  the peace of suburban Sydney is quite noticeable. I have been reacquainting myself with Brenda’s very neurotic dog Rimsky (as in…..) taking him for such unusually long walks he’s been flaked out by 7pm. Which Brenda usually is too – after days of trying to teach English to a range of immigrants from all over.  Though I don’ take her for walks!!

By Australian law, if you want to be Naturalised, you must reach a certain standard of spoken English. Some of her students are elderly women who have been coming to classes for years and still speak only Chinese or Iranian!

Meantime, out walking today , I found I may have been in the Bush way north of Sydney before…… spooky, I was only 14 then!

I went walking with one of the women who arranged my first trip out of Sydney when I arrived – remember Tom Groggin Station – the very up-market log cabin in an earlier Blog?  Penny and I hiked, scrambled and walked 12 or so Km through virtually virgin bush (yes there are markers – though I wore a screaming orange hat in case we needed to be spotted by helicopter for a rescue). It doesn’t seem far, but it took several hours. Quite oddly,  you do get a feeling for what the early explorers settlers must have encountered. Such thick and lush vegetation;  incredible trees – I called this one Busty Bertha!! 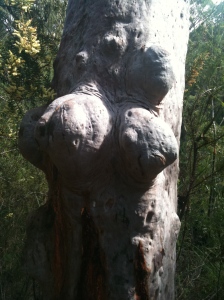 It is a gum tree of sorts, with the most amazing boles studded all over the trunk – which itself has no bark as we would know it,  just a smooth dark skin, like an elephant. You cannot resist touching it.

And who needs art in galleries, when this naturally eroded rock offers such stunning visuals!!

The landscape is almost completely sandstone – varying in hue from bright yellow, through orange to deep dark purply red. Sometimes the sand on the tracks is deeper  (and wetter) than an English beach (for want of a better word). Other times the bedrock rises underfoot and we slip and slide from the frequent small watercourses than criss-cross the land. Old oyster shells litter the riverside parts of the track – evidence of the eating habits of the original inhabitants here. Before what my thoughtful friends describe as The Invasion!  That would be Captain Cook and onwards……

Meantime, Brenda (and Penny’s partner Liz) were lazing about at their home overlooking the nearby Hawkesbury River a mile or three away. This vast inland estuary could easily have been the first main outpost rather than Sydney. Fate decreed it is now a very pretty backwater with several villages accessible by boat only, and a very popular spot for commuting and/or weekending from Sydney. Penny & Liz live here full time – high on the hill above the bay, but with vertiginous steps and gardens right down to the water. I didn’t venture down to the bottom; after our walk I rather feared that I might get down there, but my legs would refuse to come up again.

I was very ready, however,  for the barbecued lamb and veg followed by Cherry Mud Pie! (imagine that…. yum).

Barbecues, by the way,  are NOT just a summer occupation here – both Liz and Brenda have large gas barbecues in the back gardens and use them almost daily.

As I sit here now – watching Motor Racing from Belgium on the TV and writing this, I know I’ll be dragging myself up from the seat soon – legs and glutes aching!  and the bike ride I half-planned for tomorrow will NOT be happening!!

This is Penny below as we clambered up another boulder-strewn hillside.

It is just coming into Spring here and plants starting to bud and shoot. Some strange and wonderful sights : this tiny (1 inch wide) bud opening like a tiny, perfect coat button.

There are at least 500 varieties of eucalyptus trees & bushes, dozens of Banksias and even more that look like these previous two but aren’t. I could never be a Botanist.

In fact I discovered the other day that I am a “Scanner”  as a descriptor of how I approach life, work etc. This was a new word to me – but a welcome piece of information, counteracting the guilt I have felt all my life for not “applying myself” to a career. According to my “research”  the behaviour of a Scanner is to dip into everything – the world is fascinating, there isn’t enough time to check everything out etc – and after a period of brief intensity, to move on. Be it acting, exhibitions, poetry, cycling, praying, keeping fit, learning to sketch, writing Blogs (!) singing, looking for work, whatever,  etc etc etc

(The opposite pole, by the way is a “Diver” – the person who needs to microscopically investigate one special subject or topic – down to its atoms etc . Way too much information for me).

Anyway, it seems it’s OK to use my talents this way – and it explains why I have been an office worker, actor, tour director, administrator, Butler, Hotel worker, – and that’s just a few I can remember at the moment.  Armed with such information I shall be planning even more fancy flights of fancy!!

Forthcoming “Scanner” activities will include:

investigating House Sitting / Caretaker (so don’t be surprised if I end up somewhere in Europe when I finish here; come and visit me)

finalising some “consultancy” work  (cough, cough) with my old event pals from the UK who are doing cloned shows here like Better Homes & Gardens / MasterChef Live and the Baby & Toddler Show. Yikes!

And on that optimistic note I will close.  Stating only the obvious : this is not a dress rehearsal and what’s the worst that could happen?  (Most of it already happened, anyway!).

Take care. Love to all.

One response to “Post Haste – I don’t think so!”