You know, Singapore – sometimes called Gateway to the East! – must have the smartest, cleanest, tidiest airport in the World!  Well, of course I haven’t seen every airport, but I’d still wager it is.  But then Singapore city / island is probably the tidiest city state in the world too!!  As you leave the airport, you could be forgiven for thinking you were in part of a rain-forest – there are so many wonderful and old-looking trees!  But then you realise that actually, it is ALL  construction!

The highways, the planting of trees, the train lines, everything. But it is also so cleverly done, you react comfortably to it – even if you don’t realise that at once.

I remember years ago reading about the “chewing-gum” police who were employed to make sure the streets were kept clean and clear of such deposits! I’m not entirely sure that it was true, but certainly you’d have to search far and wide to find ANY deposits of litter, gum (whatever) on the streets of Singapore.

I arrived at 4.30 am en route from India to Australia – and with a 11 hour wait for the next flight,  the easiest thing to do was dump all my luggage in the Deposit room and head into the city proper.  I got there by about 6, though of course there was nothing open yet. I don’t know Singapore well, but anyway decided to avoid anything with Raffles in the name; I know there’s a whole Plaza for example, over and around the famous old Hotel (which sits marooned in a sea of high rises).

Talking of high rises, though, Singapore does do them well – I am not much of a photographer, but here’s a shot of part of the skyline. (Incidentally, this is my first attempt at downloading a photo here, so if there’s just a blank space, don’t be surprised!). There are some really very unusual shapes…. 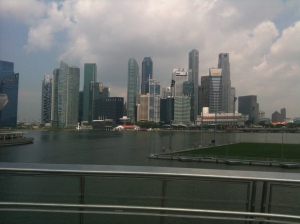 I came into the City on the Metro (Singapore$4 each way – about £2 for half an hour). But very high technology! Not unlike the latest London lines (Jubilee?) with barriers on the platform that open in synch with the tube doors. Very high spec systems inside with lights that flash showing the next station – which side the doors will open and when – and so on.

Having decided NOT to go to Raffles station (or City Hall – which I  remembered as the middle of the vast shopping area that is central Singapore), I was heading for Outram Park – as I liked the name.

At the very last minute – literally, as the doors were closing – I changed my mind and changed lines for one stop to Marina Bay. Which sounded more like being by the water and, I surmised, therefore cooler. I was very glad I did. Marina Bay turned out to be a very new development, partly under construction, the centrepiece being a Hotel, built of three adjacent towers and next door, a new art gallery.

The Marina Bay Hotel is 57 storeys high and has a roof garden, with a swimming pool and mature trees, on the Roof. The whole thing sits – like a giant skateboard! – atop the towers and indeed, shoots out into the air at one end. My picture below doesn’t do it or the Art Gallery justice. 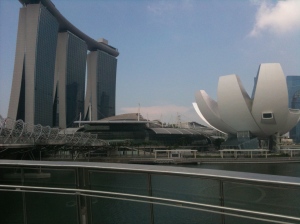 Thrilling! I was inside the Foyer about 8am, only to find that Visitors must pay to go up Tower 3 and have a look – after 10am.  The Concierge (bless her!) took pity on my crestfallen face and suggested I should go up Tower 1 to the 57th Floor where there was a Bar / Breakfast Cafe that I could go into. As it turned out I didn’t even need to do that because by blatantly using the Concierge’s name on the desk upstairs, they allowed me to just have a wander and gaze across at the skyline above and (on the other side) look down onto the Bayside where yet more buildings are under construction. I counted about 80 large tankers / container ships sitting waiting in the Bay itself. Singapore is a busy city. I was so awe-struck by the sight that I completely forgot to take pictures from the roof, so you’ll have to visit yourself to appreciate it.

Leaving the hotel, I took myself to the shopping mall below for some breakfast while awaiting the opening of the Gallery – also 10am.  Puzzling over a picture in the cafe, a passing young girl took pity on me to explain what a “Kaya Toast Set” is: 2 half-cooked boiled eggs, with toast (and some sweet stuff) and coffee. Oh and you add this sauce (looked like Soy) to the eggs.

Sounded yummy (?!) but I ordered it anyway. To my surprise – being someone who is NOT keen on boiled eggs, let alone half-cooked – it was delicious! Runny, almost grey, half-cooked soft boiled eggs, and the toast that came with was heavily buttered, made into a sandwich and the sweet stuff tasted very much like lemon curd!

And – joy of joys! – the first decent, strong cup of coffee I had since I left England. (India is not good at coffee!! Sorry. Or tea for that matter,  he added, almost heretically!).

I had a second coffee and more kaya toast – without the eggs this time – to enjoy more of the lemon curd. Incidentally, I have now looked up the “lemon curd” and according to my research, this is what it is:

Kaya (pronounced “car-yah”) is a jam or paste made from slow-cooking coconut milk, eggs, sugar vanilla and a hint of pandan leaves.  Well, now I know – not lemon curd for sure!

Feeling much fortified – I headed for my final tour stop – the Art Science Museum – you see it on the right in the picture above.  A very boring Van Gogh exhibition got my attention for 5 minutes (no actual pictures, just giant projections!) but next door was a breathtaking collection – mostly ceramics – from a Chinese shipwreck found close to nearby islands in 1998. Hundreds of porcelain plates destined possibly for the middle east – and mostly made around the years 825 – 850 AD!  That’s 1200 years ago and, whilst we British were struggling out of the Dark Ages with Alfred the Great and the Vikings, China was trading with Iran and Iraq, and copying their stylistic motifs onto their own plates.  Many survived because in the sudden shipwreck they were still packed tightly inside much bigger storage jars!  The exhibition also has some solid gold and silver pieces, but the ceramics are its glory: there’s even a wonderful one-metre high china ewer (jug) with animal head stopper and beautiful colouring. If you’re interested, there’s a brief YouTube and other information / links here  – if they work:

And so, reluctantly,  back to the Airport. Though this time I was grateful for the giant shopping malls that Singapore is heir to! I stumbled out of the glaring midday sun (didn’t Noel Coward write “Mad Dogs and Englishmen” whilst in Raffles in  Singapore? how apt!). I found this Mall connected, via several others, with the City Hall Mall – from which I could take a direct Metro back to Changhi (Airport).

Tiger Airways – who kindly flew me on to Perth (and indeed, flew me from India, too) is the local Easyjet airline – the staff spend most of the time rushing up and down the aisles with food and drink or merchandise trolleys – all of which are available –  at a cost!  But at least they are friendly, efficient and very well dressed.

From the sublime richness of Marina Bay back to the reality of budget air travel!

From Prada to Dunhill, from Cartier to LV

There is nowhere you’d go to get more.

In the end I just bought a bunch of watches

At the airport – 4 for 10 Dollars which I bartered

On for each of my friends and me –

Needless to say they ain’t Swiss!