I know, I know, some of my titling is excruciating – it can only get worse!!

You call that poetry?

No I do not

I call it verse –

which is far worse,

Anyhoo – for my final blog that relates to India – this will be mostly photographic. I baulked – at the last minute – at packing my digital camera in my small case, so all the photos come via the iPhone. And in fact are not toooo bad despite that.

What they lack in composition and artistry, I hope, will be offset by the sparkling wit that goes with them!

Enough, already. Here are a few of my favourite things (apart from raindrops on kittens, bright rubber mittens – or however that song goes!): 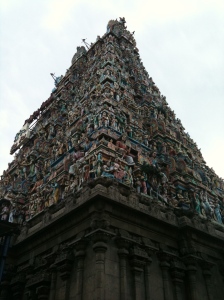 This temple roof is completely covered with individual figures – and it all gets re-painted every two years! Talk about the Forth bridge Temple.

This is a proper Juggernaut!! Quite a painting job too! 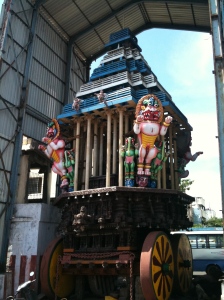 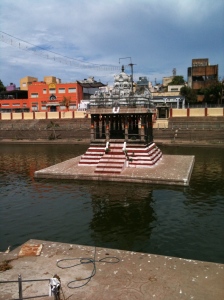 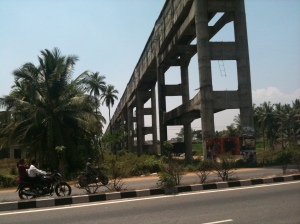 And how about this for water management? As good (almost) as anything the Romans built – tho it hasn’t had to survive 2000 years yet – maybe 200 and is still carrying water to Mysore City from the mountains. 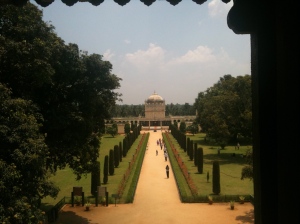 This is Tipu Sultan’s summer palace away from Mysore – on the river at Seringinpatnam (check that spelling!) where ultimately he was defeated by Wellington. 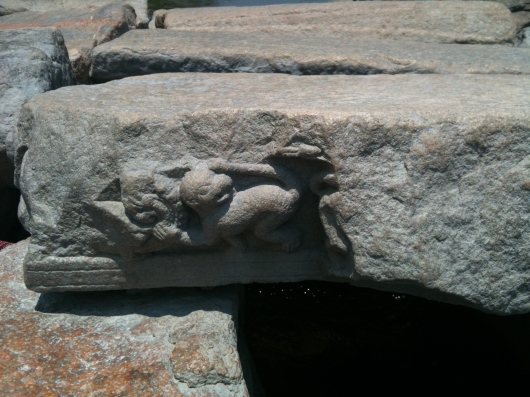 This stunning carving I mentioned in an earlier post – it is part of the wall / Water Gate at Seriningipatnam (etc!) but now – since the walls have fallen or been partly destroyed by the British, this piece sits at the River’s edge simple as a block of stone, which I stepped off into the River – as I bathed (a bit) to have all my sins forgiven. ;)) 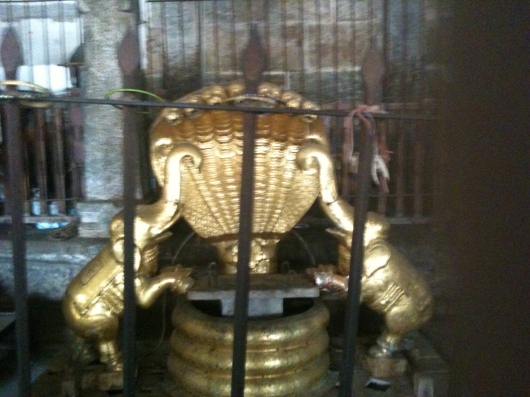 Things were not ALL bad! Here’s a solid gold throne from the Tipu’s other Palace! 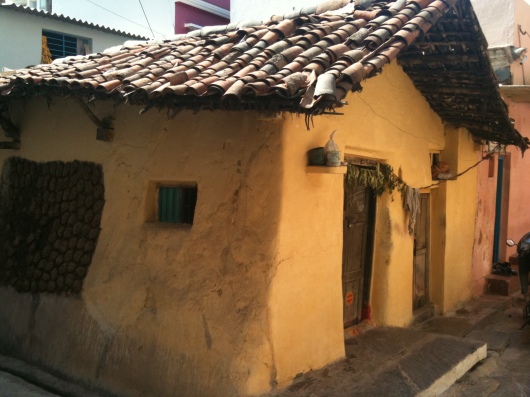 This strange little house – right behind my “hotel” in Mysore – shows what life was really like for most people say half a century ago!! 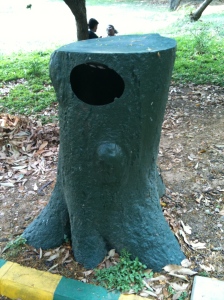 I think I will send this to the London Zoo – as an example of how you can manage the litter and be subtle at the same time!! 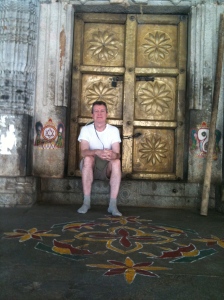 And so, the Englishman abroad takes a break (in the Temple doorway) – certain sure that the Helpful Attendant will be returning the iPhone(camera) in a moment, together with a reminder that it’s always a good idea to make a small donation to the Temple (i.e. to him!!).

OK Folks – no more India stuff for the time being – until I start on my research for the Maharaja of Coorg (when I get home!).

Hope these give a little flavour of what a strange, smelly (in every way), entrancing and befuddling country India is.

I can only encourage you all to pack a small bag, forget about keeping too clean and laundered, don’t eat anything that hasn’t been cooked immediately before. Don’t drink the water – bottles are everywhere and price-controlled; only eat fruit you can peel. If you want to eat local (as opposed to air-conditioned tourist places) pick the busy places where there’s a queue of Indians.

Don’t expect NOT to be fleeced, no matter how kind and friendly your rickshaw driver / hotel front man / waiter is – you represent £££ or $$$ for them and they will – in the politest possible way – try to remove as much as possible from you. So I always try to keep in mind that – even if I am paying Rupees 150 for a ride that really should cost less than Rupees 100, the reality is, we’re arguing over 40p!!

Hare Rama Hare Krishna  – from this old ex-hippy to you all!

Tipu Sultan, the ‘Tiger’ of Mysore,

Was a constant thorn in England’s side for sure;

He led a people who, though filthy poor,

Could nonetheless engage in heavy war!

The British were determined that the Raj

Would be the power, and with them in charge;

Tipu disputed this and fought with style,

For 20 years he fought with grit and guile;

He kept a bunch of tigers out the back,

In case he got to use them in attack.

But Wellington broke through in ’99

And, despite his French allies, a fast decline

Was the end of Tipu Sultan and his plans.

They call it the ‘garden city’

It isn’t that no more!

They call in Bengaluru,

It used to be Bangalore!

Cycles by the score.

I wonder how many died here

In those Raj-rich days of yore?

Would have carried off  more

Than now; we take the jabs

And don’t drink the water –

Some of us take malaria tabs

The rest of us probably oughta.